L’Acino was created in 2006 by three friends who are committed to working with native Calabrian grape varieties and bringing the rich viticultural tradition of the area to the wider world. The central focus of this project is highlighted in their choice of name, meaning “the grape” in the local dialect. 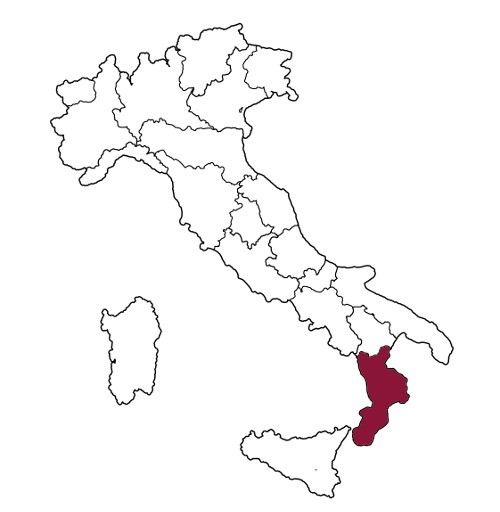 Made from local varieties magliocco, guarnaccia nera and greco nero, this lively and delicious red is made from the estate’s youngest vines. If Italy did Beaujolais, we think it would taste like this.

Intense garnet colour. Aromas of plum and cherry, Mediterranean herbs and a delicate floral quality. The palate is dense and savoury but not lacking in bright fruit and minerality, and has enough structure to withstand a few years in the cellar. Proof that Calabria does serious wine seriously well.

Made from 100% magliocco, a deeply-coloured variety indigenous to Calabria (“the heel of the boot”), from the estate’s best sites. Elegant, spicy and utterly joyful.

L’Acino was created in 2006 by three friends who are committed to working with native Calabrian grape varieties and bringing the rich viticultural tradition of the area to the wider world. The central focus of this project is highlighted in their choice of name, meaning “the grape” in the local dialect.

They began with two small high-altitude parcels planted to mantonico and magliocco, varieties indigenous to Calabria. The altitude is crucial, as they seek to create wines with a balance of fruit, acidity and mature tannins, a world away from the baked, high-alcohol bulk wines the region is better known for. These plots had never been exposed to chemicals and L’Acino continued to work in this way. Vegetation such as straw and legumes are deeply ploughed into the soil after the harvest to enrich it naturally.

Despite having no previous winemaking experience, their first vintages proved to be hugely successful. This allowed the partners to expand their operation with the purchase of a steeply-sloped, windswept vineyard composed of compact sand over a layer of solid sandstone, which helps to naturally limit the yields of the vines. Here they used selection massale to plant more mantonico and magliocco as well as guernaccia bianco and nera – the white and red grenache varieties, brought to the area in the 16th century when it was ruled by the Kingdom of Aragon.

The grapes are harvested manually and winemaking is as hands-off as possible. Fermentations are carried out using only native yeasts in stainless steel tanks, and ageing takes place in tank and bottle, with a small proportion of the Toccomagliocco aged for 10 months in used tonneaux. The wines are bottled unfiltered with minimal addition of sulphur.