Yannick Amirault crafts cabernet franc that is unparalleled in its consistent quality and its complexity. Despite coming from one of the most northerly red wine appellations in France, Amirault wines are striking for their density and ripeness. 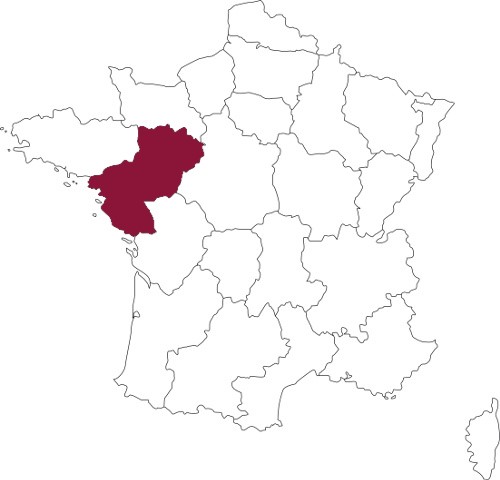 Pretty aromas of cherry, mulberry and wild flowers, with a touch of tobacco, herb and mocha. The palate is sleek and succulent, packed with ripe red fruits and wild herbs, and framed by elegant tannins.

'Côte 50' comes from various lieux-dits located close to the river Loire, on a mixture of loamy clay and sandy soils, which contribute aromatics, freshness and approachability. The fruit is destemmed but not crushed, and fermented in open top tanks followed by several weeks of maceration. Aged in old foudres and amphorae.

From a sandy site with 30-year old vines, La Source is aged in large tronconique for about 9 months. Slightly more dense than Côte 50, but just as approachable thanks to the plush, generous fruit profile.

Expressive nose of raspberry, violet and licquorice. Quite expansive on the palate, though very well-defined. After an hour or two in a carafe, the dense core unfurls to reveal plush, velvety forest fruit, tobacco and spice framed by supple tannins.

‘Les Malgagnes’ is a 2ha plot that has been in the Amirault family for generations. The average age of the vines is 50 years, although it was first planted in 1936. The lowest yields of the estate at approximately 30hl/ha. Fermentation takes place over 4 weeks in large oak casks, and the wine is matured for 14 months in barrel.

Yannick Amirault crafts cabernet franc that is unparalleled in its consistent quality and its complexity. Despite coming from one of the most northerly red wine appellations in France, Amirault wines are striking for their density and ripeness.

Yannick inherited a patchwork of 3.5 hectares from his grandfather in 1977, including the famous Les Malgagnes, and today the estate covers 19 hectares divided between Bourgueil and St.-Nicolas-de-Bourgueil, primarily on the limestone côtes above the River Loire. By employing leaf-thinning and green harvesting, yields are kept low even in abundant years, averaging 40hl/ha, far lower than the permitted 55hl/ha for Bourgueil and 60hl/ha for St.-Nicolas de Bourgueil. The estate has been certified organic since 2009, although there has been no use of chemicals in the vineyards since 1997.

In 2003, Yannick was joined by his son, Benoît. That year, the decision was taken to return to fermentation in barrel. As only native yeasts are used, the fermentations are allowed to continue for as long as needed. Furthermore, there is never any adjustment for acidity or alcohol, meaning each wine is a genuine reflection of the vintage. All the wines are aged for a minimum of 10 months before bottling to soften the sometimes-rustic tannins found in young cabernet franc. Yannick continues to bottle in the traditional way - without filtration - having tasted old vintages of his grandfather’s that were still youthful and balanced despite being over half a century old. The estate follows the lunar calendar for all vineyard and cellar work.